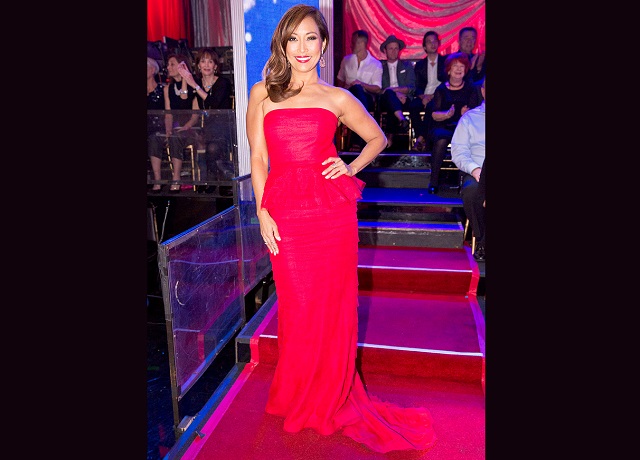 Carrie Ann Inaba has put another significance to the expression, moving on the floor chuckling.

The 51-year-old Dancing with the Stars judge took a tumble during Monday night’s scene, yet great naturedly chuckled the entire time.

The fall occurred soon after The Office star Kate Flannery and their accomplice Pasha Pashkov played out a jazz routine to the Marry Poppins great “A Spoonful of Sugar.”

Inaba spouted over the daily practice, telling the artists that it was “so well-rehearsed” and that their developments were “so in sync,” and they wound up with a score of 24/30 for their endeavors.

Yet, at that point Inaba’s energy bamboozled her, and when they rose up to take a gander at a sweeper prop utilized in the move left close to the judges’ stand, she missed her seat while in transit to sit down. The seat itself moved right off the judges’ foundation, and Inaba folded to the floor in an attack of laughs.

Inaba was fine, fortunately — however this isn’t the first run through the vivified TV character has dropped out of her seat during DWTS.

In 2012, Inaba was so started up after a rumba execution from Gilles Marini and Peta Murgatroyd that she by and by missed her seat and took an emotional tumble.

“Let the baby-making begin!” Inaba said after their daily practice, and speedily fell right off her seat and onto the floor. Host Tom Bergeron immediately kept running up to check whether she was alright, and when it was resolved that she was fine, he kidded, “When you said, ‘let the baby-making begin,’ I didn’t think you’d get in position.”

“You know what, I’ll take a fall any time like that,” Inaba gamely said once she recouped, proceeding to laud the artists.

While Inaba took another fall on Monday, they was the one and only one, as no cast individuals were sent home during the Disney-themed scene.